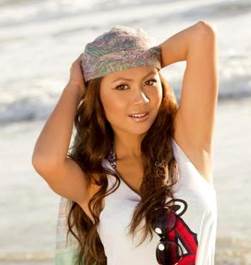 Triple threat Abby Cubey (www.abbycubey.com) is an electronica dance artist rapidly on the rise to stardom. This talented young singer song-writer has just been nominated for 3 music awards at the prestigious 23rd Annual Los Angeles Music Awards Nominee and Press Event which was held in June at the world famous Whiskey A Go-Go in Hollywood, ahead of the final awards night being held November 14th at the plush Avalon in Hollywood.

Originating from the Philippines, Abby is a multi-lingual singer with an impressive repertoire of over 5 languages, now residing in Los Angeles. Her hit song ‘Feel My Fire’, produced and co-written by music mogul Paul Drago, has been nominated in the categories of ‘Electronica / Dance Artist’, ‘Electronica / Dance Single’ and ‘Music Video’ Feel My Fire Music Video with original sounds by the songs inspiration, a $750k Raptor by Mosler fondly named the Cubey GTR.

“I am so excited to be nominated at the 23rd Annual LA Music Awards.” said Abby “To be nominated for one award is amazing but for three categories is just fantastic, no words can express my elation. I can’t begin to thank my team and fans for helping me on this journey as this is a dream come true for me and my music. I want to make everyone that votes for me proud they did at the main show in November.”

Voting for Abby at the LA Music Awards is well underway at www.lamusicawards.net/nominees, and ‘Feel My Fire’, as well as her follow-up single, ‘Man Up’ Man Up Music Video a girl power dance track Abby wrote as a tribute to her friend Manny Pacquiao, are both available on CD Baby, iTunes, Amazon.com, Rhapsody and on YouTube channel JOJOKIDMUSIC. You can also listen to Abby when she is featured on an upcoming episode of “Mickey’s Maximum Exposure” (www.facebook.com/mickeysmaximumexposure) where she will be talking about her life, loves, music influences and her hopes for winning this year’s LA Music Awards.

Known for her unique distinguishable vocal performances, her magnetic, charismatic personality and stunning beauty, Abby is currently planning her next single release with her extended team in Los Angeles and a special US tour. Aside from her passion for performing and music, Abby hosts her own radio show After Dark Radio with Abby Cubey (www.afterdarkradiowithabbycubey.com) and also heads up her philanthropy company, with business partner Paul Drago, the Abby Cubey Foundation LLC, a non-profit organization that supports children who are ill with cancer donating to the Millers Children’s Hospital in Long Beach, CA.

Voting for Abby Cubey is simple at www.lamusicawards.net/nominees.