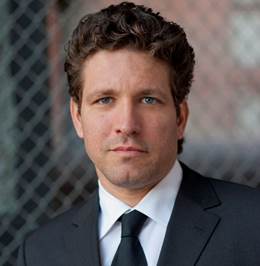 Directorial Debut of ‘My Dead Boyfriend’ ~

Born and raised in New York City, Graff has featured on major US networks. He previously co-starred in ’30 Rock’ and ‘Law and Order: Criminal Intent’ ahead of landing his latest co-star role in the new Rom-Com feature film, being directed by the award-winning ‘ER’ star Anthony Edwards.

“Anthony Edwards is an extremely articulate director, who has allowed his actors the creative autonomy they need to make a unique picture.” said Graff. “Both Heather Graham and John Corbett are not only extremely talented, but very down to earth and easy to work alongside.”

Written by Billy Morriesette, the film follows a young woman, played by Heather Graham, and her discovery as to who her couch potato boyfriend really was, after finding him at home dead. In the flashback episodes of ‘My Dead Boyfriend’, Graff plays Graham’s boyfriend, and the drummer of her band.

Aside from his acting successes, Rich Graff is a professional chef, a former Olympic qualifier in snowboarding, and a published author. He was one of the rescue volunteers during 9/11, and helped those in the Rockaways devastated by hurricane Sandy. Graff also has a Bachelor of Arts in journalism and communications, and an MFA from NYU.