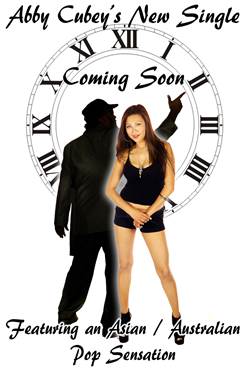 Hollywood, CA (September 23rd, 2013) – Electronica dance artist Abby Cubey (www.abbycubey.com), currently collaborating on a new hit record with an international artist, rises high in the voting race for this year’s 23rd Annual Los Angeles Music Awards after being nominated in June for three awards at the world famous Whiskey A Go-Go in Hollywood.

Abby’s hit song ‘Feel My Fire’, which has reached over 600,000 YouTube views, was produced and co-written by music mogul Paul Drago. The song, which was inspired by a $750k Raptor by Mosler, has been nominated at this year’s prestigious music awards and is gaining voting momentum in the categories of ‘Electronica / Dance Artist’, ‘Electronica / Dance Single’ and ‘Music Video’ Feel My Fire Music Video .
“I am so thrilled how my career has sky rocketed this year.” said Abby “Not only have I been nominated in three music categories at the 23rd Annual LA Music Awards, but I am collaborating with such amazing talent for my new single being recorded this month in Hollywood.”

Abby and her co-writer/producer Paul Drago are currently in the recording studio collaborating with an international superstar, who was featured on MTV with Grammy award winner Alicia Keys. His hit music has been a charting topping sensation across Asia, and now he is in Los Angeles working on a duet with Abby, a hi-tech music video and choreographers for future shows on her latest single, which is slated for an international release under a major label.

Originating from the Philippines, Abby is a multi-lingual singer with an impressive repertoire of over 5 languages, now residing in Los Angeles. She is known for her unique distinguishable vocal performances, her magnetic, charismatic personality and stunning beauty.

Voting for Abby at the LA Music Awards is well underway at www.lamusicawards.net/nominees. Her hit song ‘Feel My Fire’, as well as her follow-up single, ‘Man Up’ Man Up Music Video are both available on CD Baby, iTunes, Amazon.com, Rhapsody and on YouTube channel JOJOKIDMUSIC.

Aside from her passion for performing and music, Abby hosts her own radio show After Dark Radio with Abby Cubey (www.afterdarkradiowithabbycubey.com) and also heads up her philanthropy company, with business partner Paul Drago, the Abby Cubey Foundation LLC, a non-profit organization that supports children who are ill with cancer donating to the Millers Children’s Hospital in Long Beach, CA.