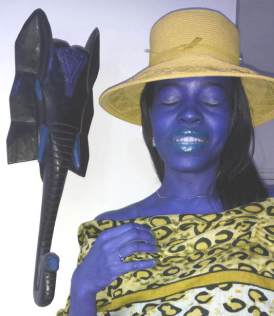 Studios are close to reaching a deal on American Butterfly, a spec script by Émilïe Ngombom, about the reintegration into society of a World War II veteran with PTSD and rejected inventions by a female scientist.  The secret script received buzz at the Tribeca Film Festival but the dealmakers were still working on international sales at Cannes.  It is believed the script will fetch a seven–figure deal.  The script has been shared with very few executives.

The magical script was written in both English and French by royalty.  That’s right.  Princess Émilïe Ngombom, daughter of a royal French West African family, has been the topic of conversation in Hollywood recently.  Ngombom who could not be reached for comment on the impending deal, has conducted extensive research globally over the past two years to help her craft her latest masterpiece.

The storyteller has crafted a tale of determination and persistence that the whole family will enjoy.  The youngest person in the script is four years old while the oldest is in their eighties.  Princess Émilïe Ngombom’s screenplay tells the true tale of Bessie Virginia Blount, an African-American female inventor during World War II.  A physical therapist by trade, Bessie invented assistive technologies that would be used by soldiers returning from the war and disabled people.

The male co-lead, the American veteran, is disabled and undergoes the type of physical transformation Oscar voters love.  While Bessie Blount’s inventions were well-received in Belgium, Canada, England and France, they were not recognized in the USA..

Inspiration for the screenplay came from Ngombom’s calling to increase the number of people, especially underrepresented groups, interested in pursuing careers in science, technology, engineering, art and math (STEAM).