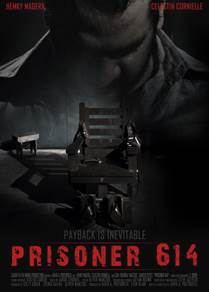 The thriller was written, directed and produced by David Portorreal, whose father was born and raised in the Dominican Republic during the reign of the dictator Rafael Leonidas Trujillo Molina, and was the inspiration for Portorreal’s award-winning film.

“The Dominican Republic is a special place to me not only because of my father, but also because of my many relatives that currently live there.” says David Portorreal. “The country’s history has always fascinated me. One day, I was speaking with my father and doing research about the Trujillo era, with the goal of writing a feature script about the time period; when I was hit with the idea for ‘Prisoner 614’. The resulting short film is an abstract, supernatural thriller which I have dedicated to him because of his courageous experiences in 1960.”

‘Prisoner 614’ is a short intense drama thriller about an off-kilter prisoner (Hemky Madera) who is brought before a determined military interrogator (Celestin Cornielle), unafraid of using violent methods for information. Things begin to heat up when one of them soon realizes that he got more than what he bargained for. ‘Prisoner 614’, which is a film festival ‘must see’, was an official selection at the Los Angeles International Underground Film Festival and won during its Premiere at the Festival de Cine Global Dominicano.

Audiences can see ‘Prisoner 614’, and meet some of the key cast, on February 12th at 3:30pm at the New Beverly Cinema, 7165 West Beverly Boulevard in Hollywood, CA 90036. Portorreal’s next film, currently in development with a Federal agent, is ‘Maite’, which is set for production in the Dominican Republic later this year.